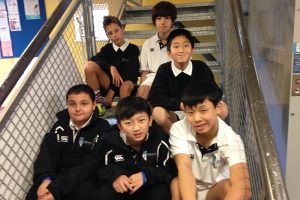 On Wednesday 20 November the whole of JX (one of our Junior classes) travelled to Sturminster Newton to play in the North Dorset Schools Badminton Competition.

The boys started by playing Gillingham School. The Sherborne International boys recognised the boys from the table tennis competition the previous day. Unfortunately, they suffered a very close defeat to Gillingham School.

They did not lose hope though and they played well to beat Sturminster Newton School.

The Sherborne International boys’ final match was against Blandford School who eventually went on to win the whole competition so there was no disgrace in losing to them.

Once all the results had been collated the Sherborne International boys finished a creditable fifth from eight teams.

Akira and Fumi were the most successful players in the team winning in both singles and doubles alongside Niko.

Hamad took control of the scoring so the team could speak to him instead of distracting the official scorers. Michael and Kun were also a valuable part of the team.